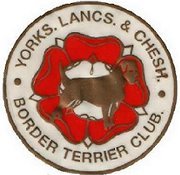 The Club shall be called the Yorkshire Lancashire and Cheshire Border Terrier Club and its objects shall be to encourage in every possible way the breeding of Border Terriers of correct type and working qualities and the judging of them at shows according to the standard of the breed.  It shall guarantee classes and otherwise support shows for the encouragement of the correct type of Border Terrier and in particular classes for Terriers holding a working certificate. Working certificates given by any Master of Fox or Otterhounds.

The Club shall consist of the President, Chairman Hon, Vice Chairman Hon. Secretary, Hon. Treasurer and a Committee of 10 and an unlimited number of Members.  No person whilst an un discharged bankrupt may serve on the Committee of or hold any other office or appointment within a Kennel Club Registered Society.

The management of the Club shall be in the hands of the Officers of the Club and A committee of 10 Members, comprising:

(b) . Main Committee not exceeding ten persons, half of whom shall retire annually but shall be eligible for re-election.

The election of members shall be controlled by the Committee whose decision shall be final.  Election to membership is to be decided by ballot of the Committee, providing those proposed are accepted by the majority of Committee members attending the Committee meeting: Joint, Single andor Junior members may be accepted following either a show of hands or secret ballot at that Committee Meeting.

(b) Voting shall be by secret ballot and decided by the majority of the meeting, unless the number of proposed and seconded Committee equal the number of vacancies that year, in which case the Chairman may call for an election  en-bloc and only if this is agreed by majority vote, by show of hands, of those present.

The accounts will be certified annually and presented to the Members at the Annual General Meeting.

NOTE:  Certification of accounts must be carried out by one qualified accountant or two unqualified individuals with accountancy experience.  Those undertaking the certification must be independent from those who prepared the accounts and the Committee.

The Annual Subscriptions shall be such amount as agreed by the members in General Meetings and notified to the Kennel Club.  No member whose subscription is unpaid is entitled to any of the privileges of Membership and if the member shall fail to pay outstanding subscription by one year from the due date (payment for each year to reach the Secretary by 31 December in the previous year) his/her name shall be automatically erased from the Register.    Acceptance back on the register will be dependent upon a new application, proposed and seconded and payment of back arrears.   Once members have been accepted for membership, providing they continue to pay their membership subscriptions at the correct time they cannot be refused renewal of membership.     With the exception of default on subscriptions the only way to remove a member from the Clubs register is by following the procedure of Rule 9

Any Member who shall be disqualified under Kennel Club Rule A11 j (5) and /or Kennel Club Rule A11 j(9) shall ipso facto cease to be a Member of the society.  If the conduct of any Member shall, in the opinion of the Committee of the Society, be injurious or likely to be injurious to the character or interest of the Society, the Committee of the Society may, at a meeting the notice convening which includes as an object the consideration of the conduct of the Member, determine that a Special General Meeting of the Society shall be called for the purpose of passing a resolution to expel him/her.  Notice of the Special General Meeting shall be sent to the accused Member, giving particulars of the complaint and advising the place, date and hour of the Meeting that he/she may attend and offer an explanation.  If at the Meeting, a resolution to expel is passed by two-thirds majority of the Members present and voting, his/her name shall forthwith be erased from the list of Members, and he/she shall thereupon cease for all purposes to be a Member of the Society expect that he/she may, within two calendar months from the date of such Meeting, appeal to the Kennel Club upon and subject to such condition as the Kennel Club may impose.  If the Society expels any Member for discreditable conduct with dogs, dog shows, trials or competitions, the Society must report the matter in writing to the Kennel Club within seven days and supply any particulars required.

The financial year of the Club shall be from the  1st January to the 31st December. The Annual General Meeting shall be held before the 28th February each year.

(a) Nature of Business to be conducted: to receive the report of the Committee and Balance Sheet, to elect Officers and Committee and to discuss any resolution duly placed on the agenda of which prior notice has been given to the Hon. Secretary.  “No business shall be transacted at the Annual General Meeting unless notice thereof appears on the agenda with the exception of routine matters or those which in the opinion of the Chairman of the Meeting are urgent”.

(b)  Notice of such meetings will be by notice in Our Dogs.

(c) . Not less than 28 days notice shall be given of Meetings.

(d) . Items for inclusion of the Agenda must be received by the Secretary 14 days prior to such meeting.

(e) . The Agenda will be circulated at the meeting.

(f) .  The required quorum for an Annual General Meeting hall be a minimum of five members, all of whom shall have paid their subscriptions in a timely manner and at the latest that payment to have reached the Secretary by 31 December in the previous year

The required quorum for a Special General Meeting of ten members, of all of whom shall have paid their subscription in a timely manner and at the latest that payment to have reached the Secretary by 31 December in the previous.

The Rules of the Club may not be altered except at a General Meeting, the notice for which contains specific proposals to amend the rules.     Any proposed alterations to the Rules may not be brought into effect until the Kennel Club has been advised and approved the alterations.     New Rules or amendments introduced specifically to meet Kennel Club requirements shall be adopted immediately and be included in the Society's Constitution with effect from the Society's Annual Meeting.  The committee shall have the power to deal with any questions not provided by the rules.

14. ANNUAL RETURNS TO THE KENNEL CLUB

The Officers acknowledge that during the month of January each year, the Maintenance of Title fee will be forwarded to the Kennel Club by the Secretary for continuance of Registration and that by 31st July each year, other returns stipulated in the Kennel Club Regulations for the Registration and Maintenance of the Title of Societies and Breed Councils and the affiliation of Agricultural Societies and Municipal Authorities shall be forwarded to the Kennel Club.  The’ Officers also acknowledge their duty to inform the Kennel Club of any changes of Secretary of the Society which may occur during the course of the year.

The Kennel Club is the final authority for interpreting the rules of the Society in all cases relative Canine or Society  matters .  The Club shall not join any Federation of Societies or Club's (except Kennel Club permission granted on 21st February 1986 to join the National Federation of Working Terrier Clubs).

Members of the Judges Sub Committee (“JSC”) are chosen by the Yorkshire Lancashire Cheshire Border Terrier Club Committee and will consist of all the Judges on the Committee who award Challenge Certificates (“CCs”) to the Breed, along with any external judges not on the Committee but chosen by the Committee who do not award CCs in the breed, but the Committee will ensure the JSC consists of at least 75% of CC judges in the breed, as required by the Kennel Club.  This JSC will meet annually for the purpose of compiling  the Club’s Judges List A1, A2, A3, B and C, as required by the Kennel Club, which will expire annually on the 31 December each year.  New list will be compiled by the JSC each year.  Voting at the JSC will be by show of hands, or by secret ballot, whichever the majority of those present decide.

A1 LIST: Persons whom the Club would support who have previously been approved by the Kennel Club to award Challenge Certificates in the breed and have carried out the appointment.

A2 LIST:       Persons whom the Club would support, if invited to judge, would in principle be approved by the Kennel Club to award Challenge Certificates in the breed for that occasion.

A3 LIST:      Persons whom the Club would support as being suitable to award Challenge Certificates in the breed but are not yet approved by the Kennel Club for inclusion on an A2 List.

B LIST:    Persons whom the Club would support to judge the breed at Championship Shows without Challenge Certificates or at Open Shows.

C  LIST:    Persons whom the Club would support to judge the breed at Open Shows with 3 or less classes and Limited Shows.

An up to date criteria and Judges Questionnaire will be available on the Club Website or may be obtained from the Club Secretary.  Each year the society will publish on its website and/or in one or more of its schedule, he date by which completed and updated Club judging Questionnaires are required for review by the Judges Sub Committee so that the JSC may compile the Following Years List:  A1,  A2,  B  and C list as required by the Kennel Club.

The Lists will be drawn up at a separate JSC meeting each year where the voting may be by a show of hands or by secret ballot, whichever the JSC decide.  No person will automatically be included in the judging list just because they fulfil the basic crieria.

All members of the (YORKSHIRE LANCASHIRE AND CHESHIRE BORDER TERRIER CLUB)undertake to abide by its general Code of Ethics.

Will properly house, feed, water and exercise all dogs under their care and arrange for appropriate veterinary attention if and when required.

Breach of these provisions may result in expulsion from club membership, and/or disciplinary action by the Kennel Club and/or reporting to the relevant authorities for legal action, as appropriate.